SCG Stadium is the home venue of SCG Muangthong United, one of the most famous football teams in Thailand. The stadium sits in IMPACT Muang Thong Thani, Nonthaburi. Right next to Novotel Bangkok IMPACT. And will take guests only 1-minute to walk to the football stadium. This is also the football stadium where Thailand League holds games. With many fans and visitors joining these exciting games.

This is one of the biggest football arenas in Thailand. And many famous domestic league games are played here. The league season runs during March-October. And the stadium itself seats 15,000. But rather than sit down in the excitement. Get prepared to jump around and cheer with others. And join in during the game, with many fans cheering with large banners and flags.

SCG Muangthong United F.C. is a Thai professional football club based at this venue. The team joined the Thai Premier League since 2009. After they won the Thai Division 1 League title in 2008.

SCG Stadium was the first operating football stadium in Thailand. The ‘Thunder Dome Sports Complex’ opened in 1998 before turning to football field. There were many names before changing to SCG Stadium, the club title sponsor of SCG. Its names were Thunderdome Stadium and Yamaha Stadium following the sponsorship. However, this arena is also a multi-purpose stadium as it welcomes other events and concerts sometimes. There is also SCG Muangthong United’s shop inside the stadium too. You can find souvenir such as a player’s scarves, shirt, key chains, and more here.

SCG stadium does have a great atmosphere and location making for an enjoyable visit. Those who love football will love this stadium! If you wish to join the game, you can check the upcoming matches via this link. The match normally starts in the evening. If you come early, you can spend some relaxing time before the game starts at Novotel Bangkok IMPACT. 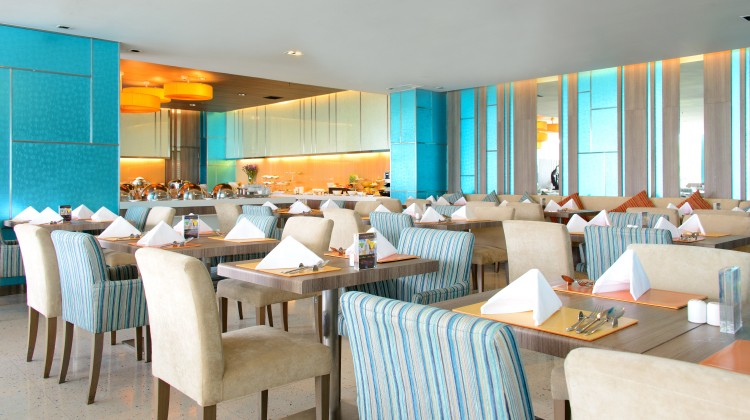 Novotel Bangkok IMPACT is located in the same area of SCG Stadium. There are 2 restaurants where you can enjoy delight meal before the game starts. The SQUARE restaurant serves Thai and international menu. If you come for SCG Muangthong United games on weekends. You will find fresh seafood buffet on lunch and dinner time. Chef brings fresh river prawns from Ayutthaya to pair with a beautiful array of seafood. Prego Trattoria offers an original flavour of Italian cuisine in modern luxury room. You can take a short walk to SCG Stadium with ease. After the match, 94 Bar is ready to serve your favourite drinks to you. We also offer 12-hour complimentary parking when you enjoy your meal in our restaurant.